With his move to Secret, iceiceice will be taking over the offlane role that was vacated by Ludwig “zai” Wåhlberg, who left to join Team Liquid earlier this month.

The Singaporean offlaner will also be the first-ever Southeast Asian player to compete in Division I of the DPC’s Western European regional league.

However, iceiceice’s stint with EG ended on a sour note after they exited The International 10 (TI10) early in 9th-12th place.

This move also marks the fourth region that iceiceice will be playing in for his expansive, globe-trotting career.

After spending most of his early career in Southeast Asia, iceiceice played in China from 2013 to 2016 with top teams Team DK, Vici Gaming, and EHOME.

He returned to compete in his home region from 2016 to 2020, playing with Team Faceless, Mineski, and Fnatic, before heading out west to North America and now Europe.

“A veteran of Southeast Asia, iceiceice has been training in the toxicity and free-for-all realm that is SEA Dota for over a decade now, putting his mark on the professional scene with a third place finish at The International 2011.

Since then, iceiceice has excelled on multiple rosters, stacking up trophies and accolades on his journey to reach us. Now, iceiceice will finally pair up with [Secret captain Clement “Puppey” Ivanov], and the East + West pillars of Dota will finally unite!” Secret said in a statement.

“Pretty excited to be playing with Secret. It’s a perfect lineup for my playstyle, and Puppey has always been someone I’ve wanted to play with for the last 10 years. I love camels and I can’t wait to be punched by Puppey,” added iceiceice.

Iceiceice joins a stacked Secret roster that includes highly-talented players in Michal “Nisha” Jankowski and Yazied “YapzOr” Jaradat as well as a living legend in Puppey among its number.

Secret notably has one more position, the midlane role, left to fill after Lasse “MATUMBAMAN” Urpalainen also left to join Liquid. The team’s former midlaner, Nisha, was recently shifted into the carry role in order to make way for a new midlaner.

Secret was notably the first team among those that finished in the Top 8 of TI10 to make changes to its roster in the post-TI10 roster shuffle with the departures of zai and MATUMBAMAN. Two-time TI champions OG were the second after they parted ways with Sumail “SumaiL” Hassan and Martin “Saksa” Sazdov.

The roster shuffle began in earnest shortly after TI10, with teams that bombed out of the tournament such as Alliance, Fnatic, Thunder Predator, and SG Esports making changes to their rosters.

The competitive Dota 2 scene revolves around TI, Dota 2’s yearly world championship tournament that has regularly broken the record for the biggest prize pool for a single esports event year after year. TI10 featured a US$40 million prize pool, with the lion’s share of US$18.2 million as well as the coveted Aegis of Champions going to champions Team Spirit.

The yearly post-TI roster shuffles came as a result of the importance of TI to the game’s competitive scene, with teams that either failed to qualify or placed poorly in the tournament often revamping their rosters in preparation for another run at the Aegis of Champions.

TI’s importance in the scene has even manifested itself in how contracts between players and their organisations are structured, with most contracts ending with the conclusion of TI.

This arrangement has allowed both teams and players to explore their options and better prepare for the next iteration of the DPC and TI.

The 2021-2022 DPC season will be starting at the end of November and has been split into three Tours for the Fall, Winter, and Spring, with the regional leagues taking place from 29 November 2021 to 17 July 2022.

Evil Geniuses has long had the ability to attract elite Dota 2 players, but the 2020 signing of Daryl Koh “iceiceice” Pei Xiang was a bit of a surprise.

iceiceice joined Evil Geniuses as its starting offlaner in November 2020, replacing Roman “RAMZES666” Kushnarev. So how did that signing come to pass? WIN.gg spoke with Evil Geniuses to get a rundown on how the team came to be and what it’s been like for the team.

Why did Evil Geniuses drop RAMZES666?

“It was basically a situation where RAMZES felt like he wanted to go back to playing carry,” Evil Geniuses captain Tal “Fly” Aizik said during media day at The International 2021.

“We weren’t able to play with each other for a long time, The International was delayed, everything was up in the air, and then RAMZES decided that this is what he wanted to do. At the time, we were happy playing with RAMZES but he felt like he no longer wanted to play offlane,” Fly said.

The urge to move to a carry role isn’t surprising for RAMZES. The Russian player has spent the majority of his career in the one position, with overwhelming success including winning five majors. Unfortunately for RAMZES, there was little chance that he’d be able to pry EG star player Artour “Arteezy” Babaev out of that spot.

RAMZES666 departed Evil Geniuses in November 2020 after only playing with the team at five events. The release of RAMZES666 didn’t pan out especially well for him, as he spent much of the 2022 Dota Pro Circuit season inactive before joining Natus Vincere at the start of a controversial and disastrous series of roster moves.

The departure of RAMZES666 left a hole at the three position for Evil Geniuses. While iceiceice had never competed in the western Dota 2 scene, he was seemingly one of the top picks for the offlaner position.

“After that we had time to figure things out and I think everybody on the team respected iceiceice as a player so he was definitely one of the first players we thought about. So we approached him, got to talk a little bit, and it seemed like it would work out well for us. And I think it has,” Fly said.

Though success at The International is often seen as the primary barometer for success in Dota 2, Evil Geniuses has looked quite formidable with iceiceice. The team reached the grand finals of the WePlay AniMajor and the ONE Esports Singapore Major to take the top spot in the Dota Pro Circuit. Evil Geniuses’ run at TI10 didn’t start in ideal fashion, but the team looked excellent in its playoffs debut against Elephant.

While one might expect the pivot from Asia to North America might be a jarring one for some players, iceiceice noted that it’s not all that different from playing with the Southeast Asian teams he’s previously been a part of. Both of those regions are quite different from China, however.

“In China, you stay and live together and just grind matches…in Southeast Asia it’s kind of chill, you’re not expected to stay with each other,” iceiceice said.

That said, there is one main difference between competing in his home region compared to North America. He’s not quite accustomed to American cuisine quite yet.

“I guess the main difference is food. When I was in China you had to have rice every day but in North America you only have it sometimes,” iceiceice said as Fly and his teammates chuckled.

Judging from the discussion, the camaraderie for Evil Geniuses seems to be there. But as Fly himself knows, the power of friendship is no match for the urge to hit the reset button after a disappointing placement at The International.

Evil Geniuses is currently sitting in the lower bracket and will have to make a big run if the squad hopes to claim its second The International championship. 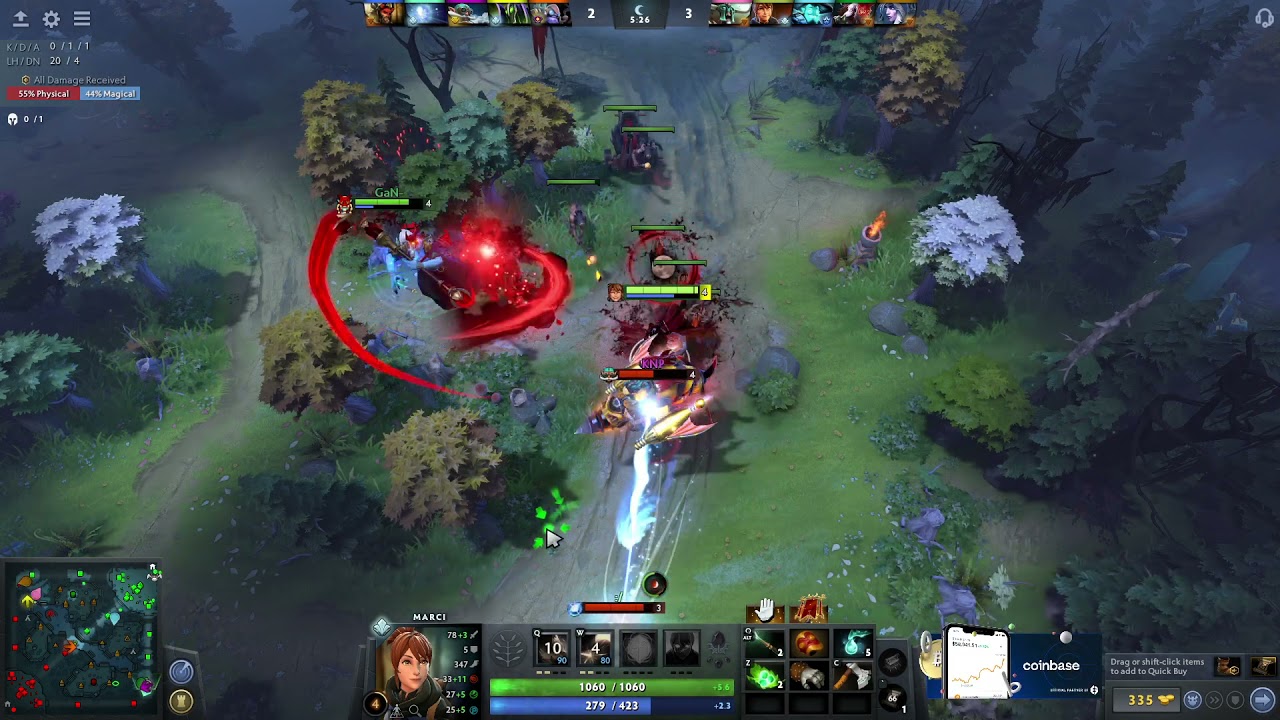 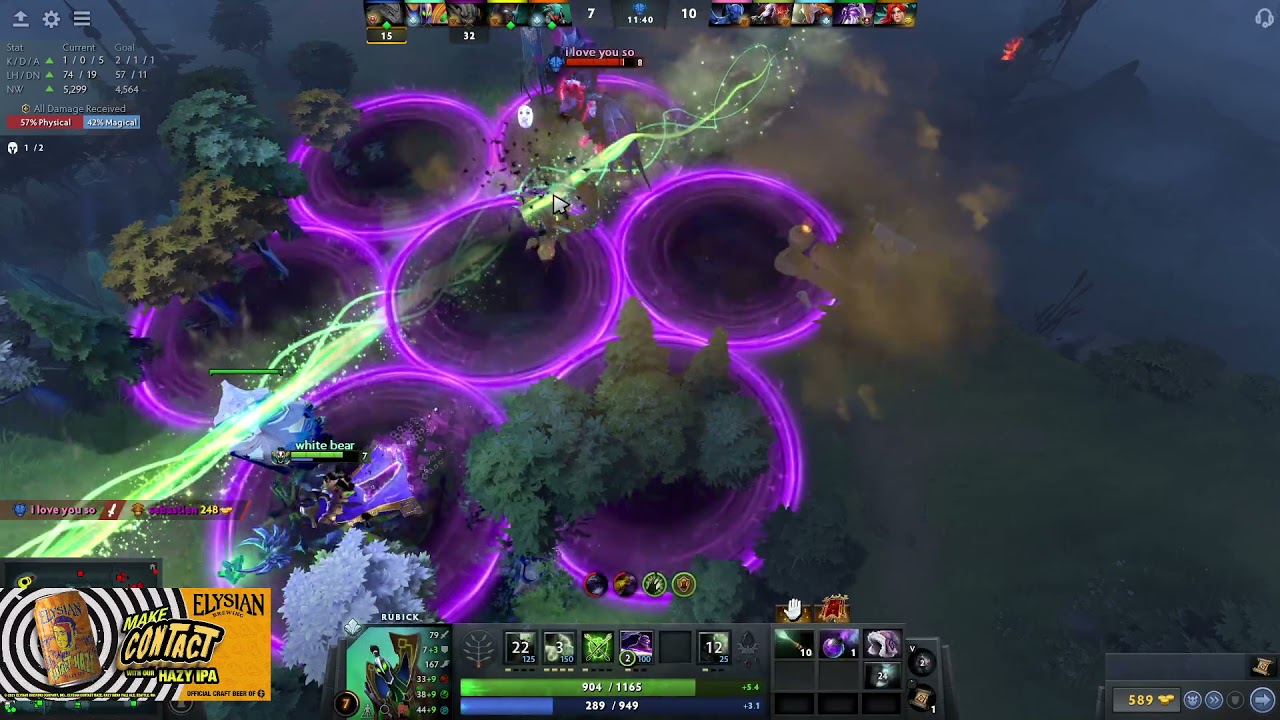 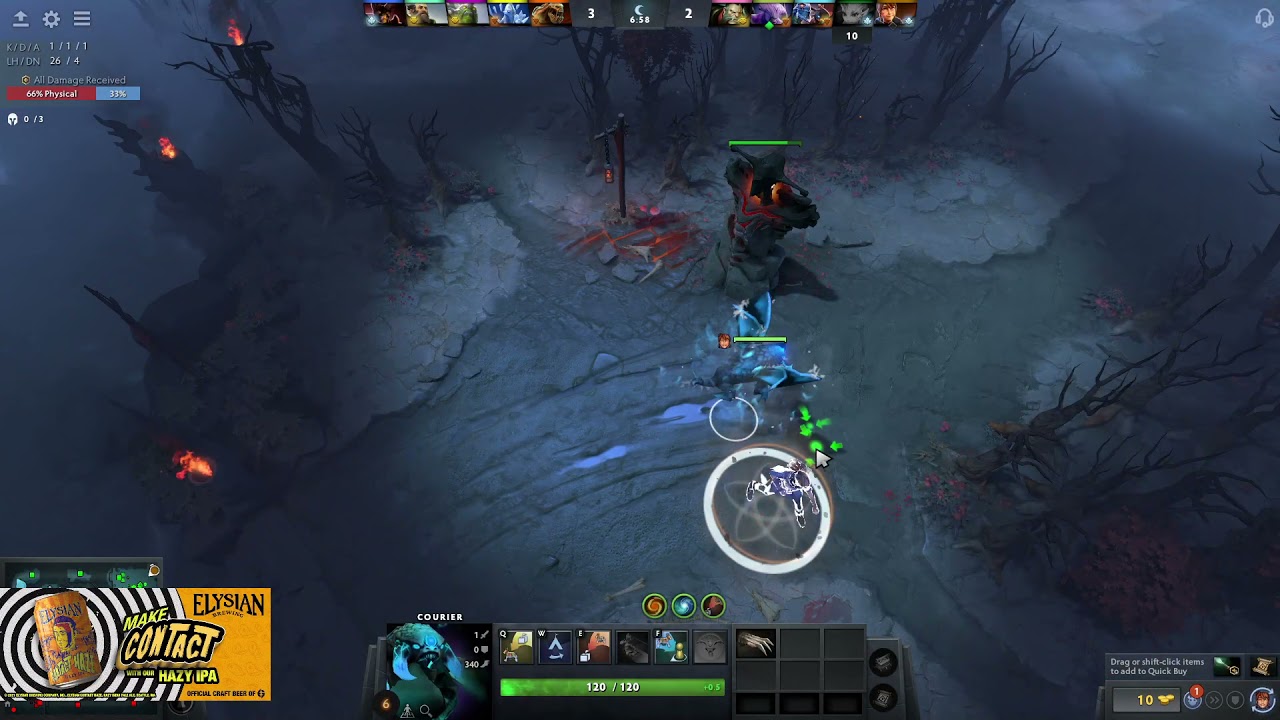 ATF is rumored to be the new OG offlane. 42 kills on Timbersaw in a single game with 0 deaths
ATF Dota2 DreamOG
Match id: 6278131185
Music by Epidemic Sound
A Hero’s Vendetta, A March Across Ancient Land, A New Horizon, Across the Waters, Adventure Awaits, Adventures of the Young Hero, And We Will Rule, Battle of Wills, Behind the Dusk, Conquest, Destiny Rising, Disciples of Sun Tzu, Dragon King, Epic Voyage, Final Target in Sight, Forest Run, Forever to Run, Frozen Thunder, Galactic 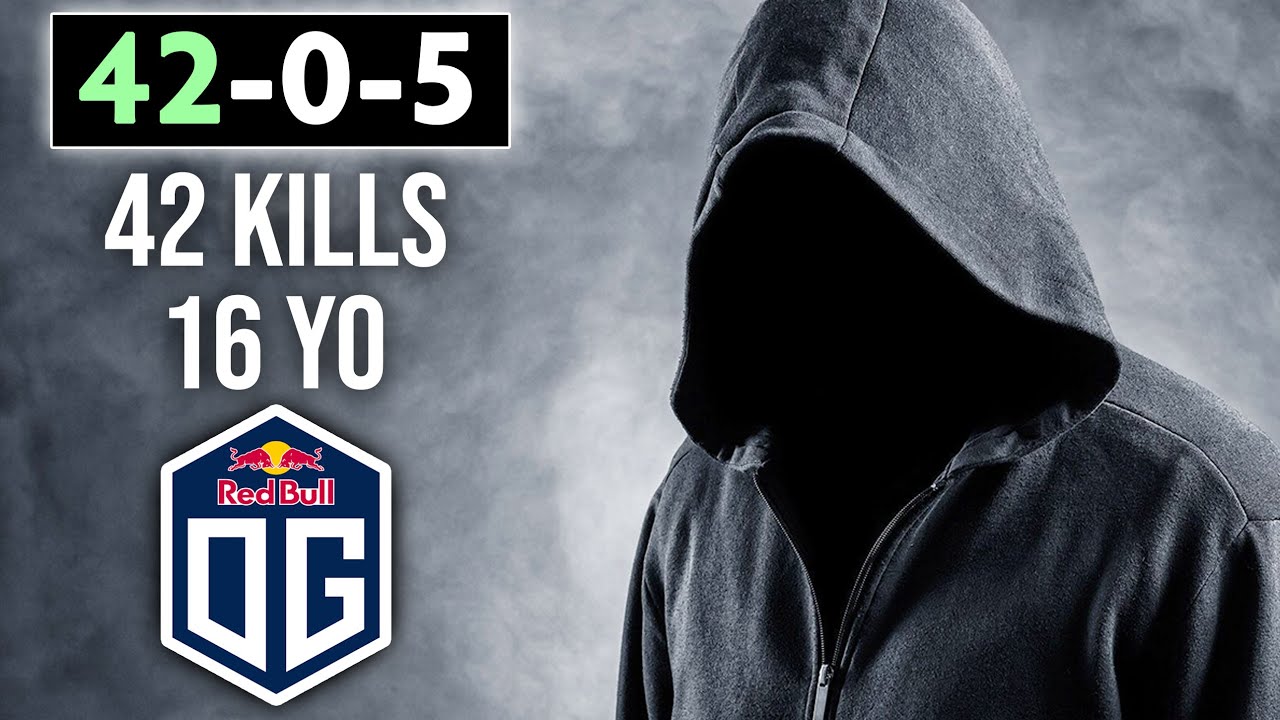 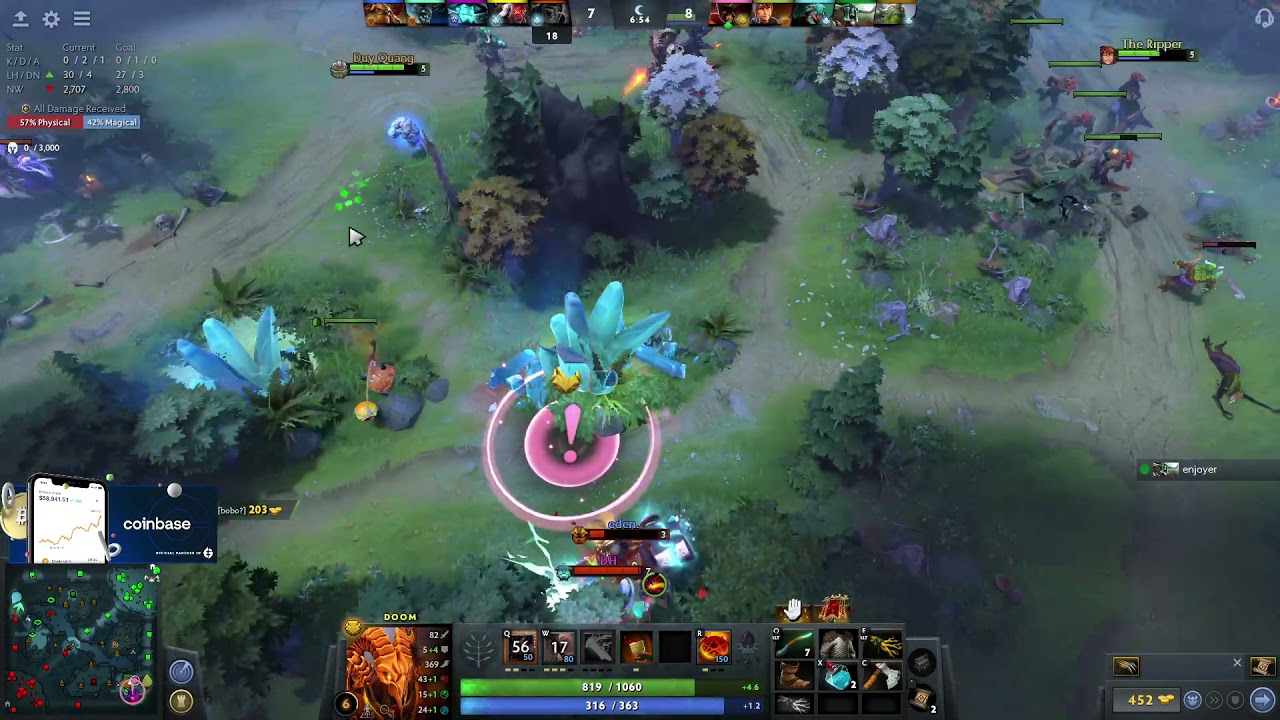