BROWSER BUILD IS OUTDATED AND NO LONGER SUPPORTED

– weapons all rebalanced, added attack speed scaling as well (multiplicative and applied after all other attackspeed buffs)
– new helmet can be found in shuriman catacombs and allows access to a new boss fight and a new area
– added the void
– added a new boss fight in the void with 2 unique weapons
– character swap orbs removed, replaced with interactive characters chilling in the temple
– added ornn’s forge and an item compendium
– killing gold implings will drop gold coins which can be used to forge items
– sovereign’s crown function changed from bonus strength to generating gold on kill
– pressing 0 now changes the game quality level until we have a settings menu
– added RAGDOLLS- not all enemies have them

– general
— dark flight: aiming at too high an angle will always use the max forward distance angle rather than going straight down
— umbral strike: rewritten with all current bugs fixed

– boris
not much to say here

– mordekaiser
a bit too much raw power, can cheese basically the whole game by standing still holding right click
gets even worse with world rune since he literally cannot take damage from anything

– azir
bit of qol and a nice dps buff, weapon update helps him out as well with his attack speed scaling on m2

– warwick
overall warwick is in a good spot but his lategame is really lacking, this should help

— now has lifesteal when below 50% hp, tripled when below 25%
— blood hunt(r) now grants scaling bonuses based on how much of the bar is filled
— new vfx
— unique vfx during blood hunt

– ghoul
not really intended to change the character, just hitting the enemies specifically

– world ender
didn’t deserve the nerfs he got last update, especially with everyone else getting buffed, so he’s getting that power back

– pantheon
power was in a decent spot but felt boring and awful to play with no real strengths or weaknesses
this update gives him unique mechanics to play with as well as increasing overall satisfaction on everything
tl;dr 5 hit passive, empower next attack, motherfuckin mandrop

— new roll animation
— end lag on all attacks reduced by 0.2s
— slightly increased range on spear attacks
— buffed up shield attack motion values to compensate for lower range
— pressing f while midair will now swing your spear forward
— hitting terrain will lodge the spear in the terrain, letting you hang
— hitting an enemy will knock them down and launch you upward
— pressing space while hanging jumps up
— shield input moved over to standard shield usage key, using gun will override and disable shield but please don’t use gun it’s useless
— new ultimate
— 5 successful hits charge up your ultimate, press r to ignite weapons, consuming all stacks
— ultimate will greatly empower and change your next attack; press r again to cancel(doesn’t give stacks back)
— f – the motherfuckin mandrop. channel for 2 seconds, then leap straight up into the sky; pause in mid-air and enter aim mode. press button to land at target location, or drop straight down if aimed too high
— m1 – aoe flaming sweep with high damage
— m2 – slam shield into the ground, creating a shockwave and stunning nearby enemies
— back m2 – spartan kick with huge wind blast, dealing aoe damage in a cone and sending all enemies hit flying
— back m1 – murder blender

“I must destroy even hope…”

Periodically, Aatrox’s next basic attack deals bonus physical damage and heals him, based on the target’s max health.

Aatrox slams his greatsword down, dealing physical damage. He can swing three times, each with a different area of effect.

Aatrox smashes the ground, dealing damage to the first enemy hit. Champions and large monsters have to leave the impact area quickly or they will be dragged to the center and take the damage again.

Passively, Aatrox heals when damaging enemy champions. On activation, he dashes in a direction.

Affects
Enemies and Self

Aatrox unleashes his demonic form, fearing nearby enemy minions and gaining attack damage, increased healing, and movement speed. If he gets a takedown, this effect is extended.

Once honored defenders of Shurima against the Void, Aatrox and his brethren would eventually become an even greater threat to Runeterra, and were defeated only by cunning mortal sorcery. But after centuries of imprisonment, Aatrox was the first to find freedom once more, corrupting and transforming those foolish enough to try and wield the magical weapon that contained his essence. Now, with stolen flesh, he walks Runeterra in a brutal approximation of his previous form, seeking an apocalyptic and long overdue vengeance.

Whether mistaken for a demon or god, many tales have been told of the Darkin Blade… but few know his real name, or the story of his fall.

In ancient times, long before desert sands swallowed the empire, a mighty champion of Shurima was brought before the Sun Disc to become the avatar for a now forgotten celestial ideal. Remade as one of the Ascended, his wings were the golden light of dawn, and his armor sparkled like a constellation of hope from beyond the great veil.

Aatrox was his name. He was at the vanguard of every noble conflict. So true and just was his conduct that other god-warriors would always gather at his side, and ten thousand mortals of Shurima marched behind him. When Setaka, the Ascended warrior-queen, called for his help against the rebellion of Icathia, Aatrox answered without hesitation.

But no one predicted the extent of the horrors that the rebels would unleash—the Void quickly overwhelmed its Icathian masters, and began the grinding annihilation of all life it encountered.

After many years of desperate battle, Aatrox and his brethren finally halted the Void’s perverse advance, and seared the largest rifts shut. But the surviving Ascended, the self-described Sunborn, had been forever changed by what they had encountered. Though Shurima had triumphed, they all had lost something in their victory… even noble Aatrox.

And in time, Shurima fell, as all empires must.

Without any monarch to defend, or the existential threat of the Void to test them, Aatrox and the Sunborn began to clash with one another, and eventually this became a war for the ruins of their world. Mortals fleeing the conflict came to know them instead by a new and scornful name: the darkin.

Fearing that these fallen Ascended were as dangerous to Runeterra’s survival as the Void incursions had been, the Targonians intervened. It is said that the Aspect of Twilight gave mortals the knowledge to trap the darkin, and the newly reborn Aspect of War united many in fighting back against them. Never fearing any foe, Aatrox and his armies were ready, and he realized only too late that they had been deceived. A force greater than a thousand dead suns pulled him inside the sword he had carried into battle countless times, and forever bound his immortal essence to it.

The weapon was a prison, sealing his consciousness in suffocating, eternal darkness, robbing him even of the ability to die. For centuries, he strained against this hellish confinement… until some nameless mortal was foolish enough to try and wield the blade once more. Aatrox seized upon this opportunity, forcing his will and an imitation of his original form onto his bearer, though the process quickly drained all life from the new body.

In the years that followed, Aatrox groomed many more hosts—men and women of exceptional vitality or fortitude. Though his grasp of such magics had been limited in life, he learned to take control of a mortal in the span of single breath, and in battle he discovered he could feast on his victims to build himself ever larger and stronger.

Aatrox traveled the land, searching desperately, endlessly, for a way return to his previous Ascended form… but the riddle of the blade proved unsolvable, and in time he realized he would never be free of it. The flesh he stole and crudely shaped began to feel like a mockery of his former glory—a cage only slightly larger than the sword. Despair and loathing grew in his heart. The heavenly powers that Aatrox had once embodied had been wiped from the world, and all memory.

Raging against this injustice, he arrived at a solution that could only be born of a prisoner’s desperation. If he could not destroy the blade or free himself, then he would embrace oblivion instead.

Now, Aatrox marches toward this merciless goal, bringing war and death wherever he goes. He clings to a blind hope: if he can drive all of creation into a final, apocalyptic battle—where everything, everything else is destroyed—then maybe he and the blade will also cease to exist. 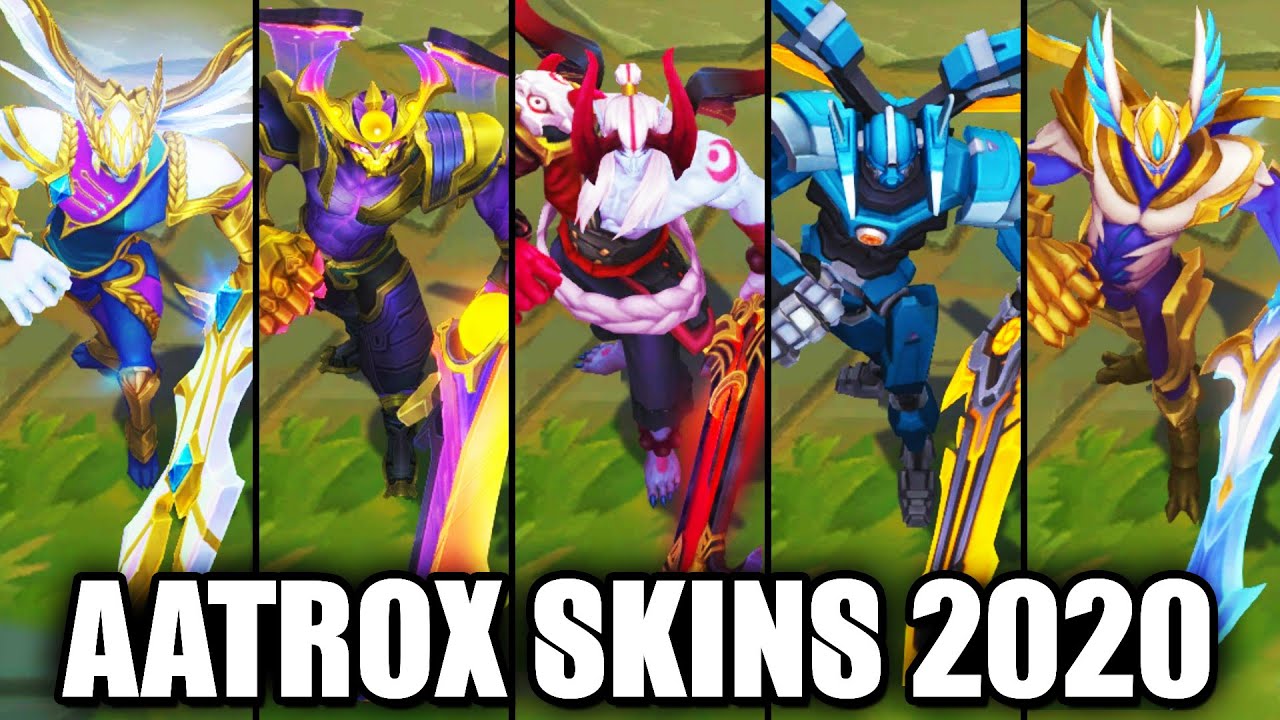 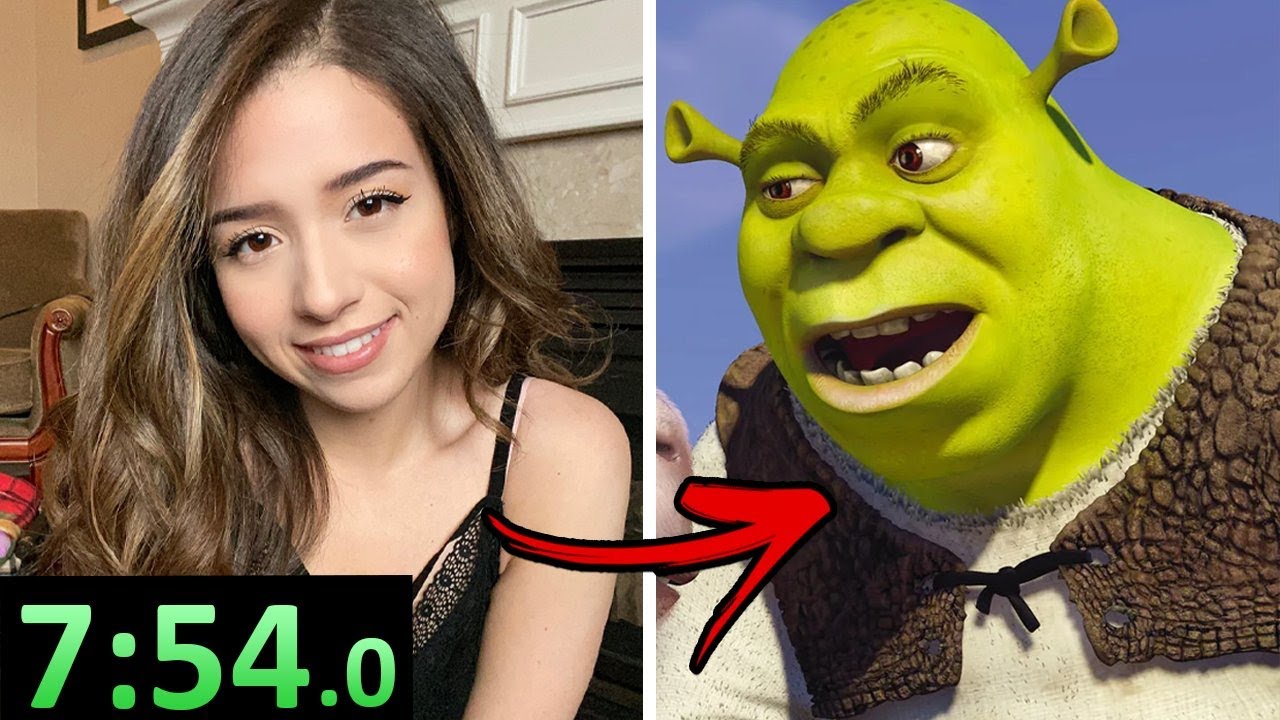 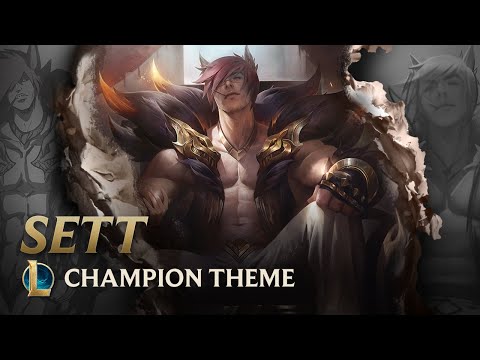 League of Legends Mecha Aatrox Skin Spotlight.
Purchase RP here (Amazon Affiliate NA): https://amzn.to/2qZ3Bmv
Shows off Animations and Ability Effects of Aatrox on their Mecha Skin in this Spotlight.
All footage was taken in game.
Feel Free to Follow me on Twitter as well:
https://twitter.com/SkinSpotlights
For League of Legends Related News Check Out [email protected]:
http://www.surrenderat20.net/
Facebook for all you FB Users who want to keep upto date:
https://www.facebook.com/Skinspotlights
Please feel free to subscribe for more Skin Spotlights and to keep upto date with all the future spotlights and to leave a like! 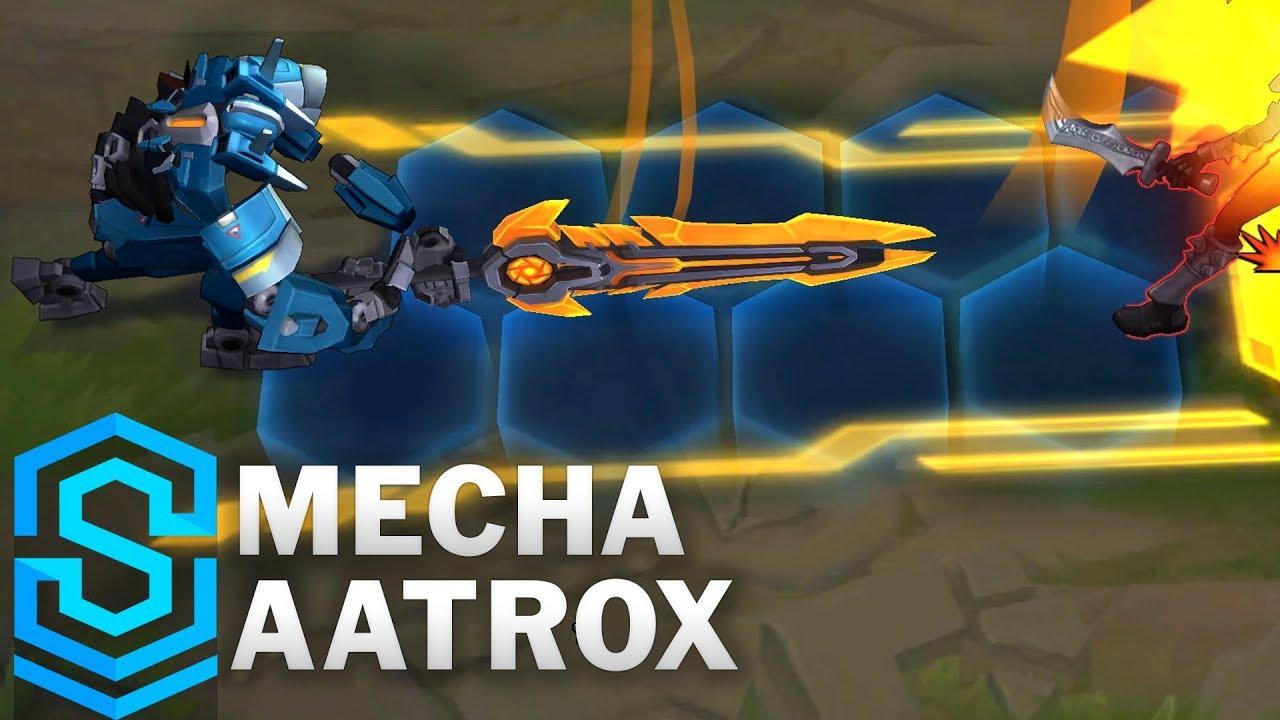 What 8000 HOURS of AATROX Experience Looks Like – Best of Naayil

What 8000 HOURS of AATROX Experience Looks Like Best of Naayil
Join this channel to get access to perks:
https://www.youtube.com/c/Synotik/join 🔥 💙
► MAKE SURE TO LEAVE A \”LIKE\” IF YOU ENJOYED THE VIDEO!