Lina is another of Dota’s original heroes that remain largely unchanged in gameplay. Sure, there are a few additions to her abilities and how they work here and there. But she’s remained relatively the same since IceFrog and co. first conceived her. Now, the addition of several new items as well as changes into Dota 2 did change a few things on her general playstyle.

Thus, we’re going to talk a bit about Lina in Dota 2, and how to make the most out of gameplay with this hero. 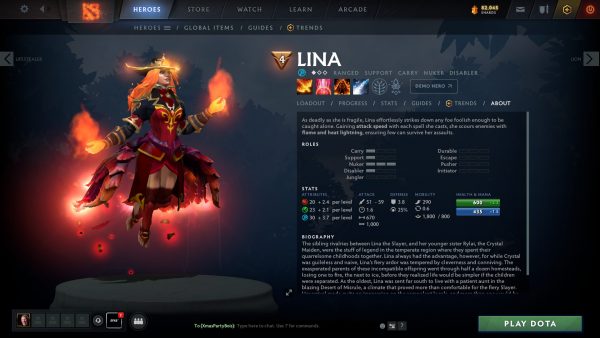 Lina the Slayer and Rylai the Crystal Maiden are siblings, with the former being younger than the other. However, there’s no love lost between the two of them, and their spats are a thing of legend. Their lovely temperate home is usually beset by their rivalry, constantly being flash-frozen or set ablaze. Their parents, annoyed at their two children not getting along, decide to separate them for everyone’s safety.

Lina is the clever one of the two and is the more belligerent. She’s incredibly willful, but it’s tempered by her cunning. When she and her sister are separated, she is sent to an aunt in the desert of Misrule, whose temperatures are naught but comfy for the blazing woman. Her arrival in the desert was marked by a rather blazing entrance of chaos, and once she bloomed into adulthood—more than a few suitors were sent away with scorched fingers and burnt pride. Lina after all is like a roaring flame, beautiful to gaze at, hard to touch. And it’ll take a lot more than that to stop her flame from burning brighter.

Lina the Slayer is an intelligent main stat hero that fights from a range with burning fireballs and other flame-related abilities. She excels in burning opponents to cinders by high burst damage from her abilities. This makes her one of the more terrifying ganking heroes in the game. Because a well-placed stun from Light Strike Array can set up to a powerful Dragon Slave + Laguna Blade Combo. She’s one of the most flexible heroes in Dota 2 when it comes to her role in-game.

What Are the Skills of Lina in Dota 2? 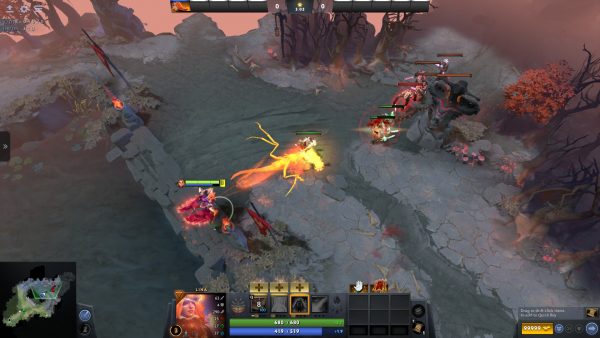 Misrule, Lina’s home, is a scorched barren, enough to bore someone. It’s here that Lina took the breath of a Desert Wyrm and made it her own. For power? No, purely to amuse herself.

Lina sends a wave of fiery death in the shape of a dragon forward, scorching enemies to ash. 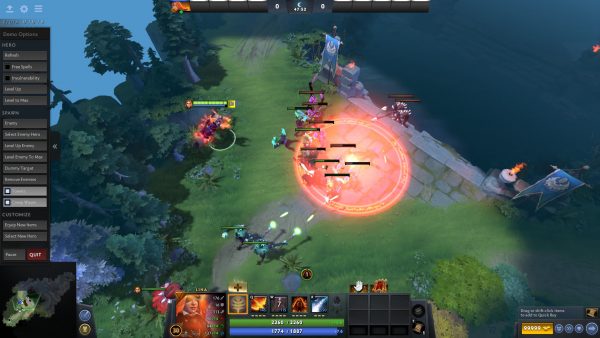 Lina is pretty much fire itself. Her very essence allows her to channel the energies of the sun, causing the air around an area to combust itself.

Lina summons a pillar of flame that scorches enemies and stuns them for a few seconds.

Lina’s nature is embodied by a blazing flame, dancing in the days and nights.

Lina gains bonus movement speed and attack speed every time she uses one of her spells. This bonus lasts for 12 seconds. 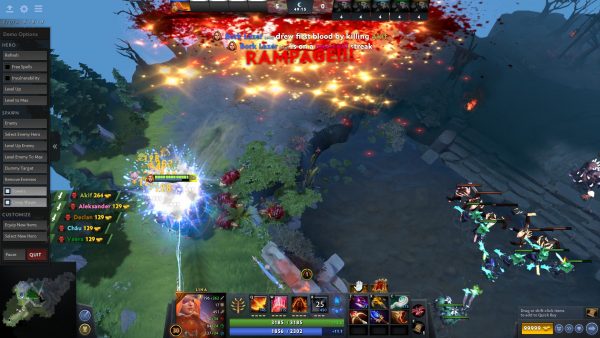 Lina’s flames burn so strong that the air around her turns into white-hot lightning. This is usually enough to turn her foes to dust.

Lina’s flames are so strong she can shoot lightning that would make you wonder if she’s a Sith. She fires a bolt of concentrated lightning towards an enemy, dealing incredible damage.

What Are the Talents of Lina in Dota 2? 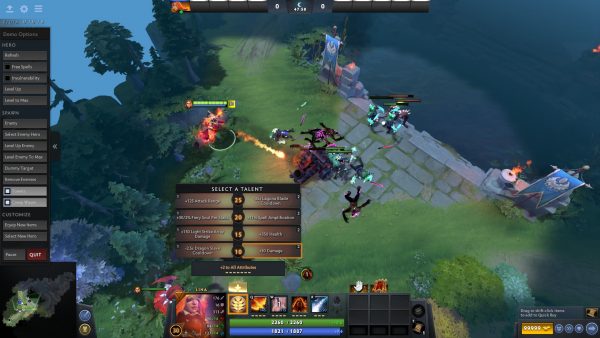 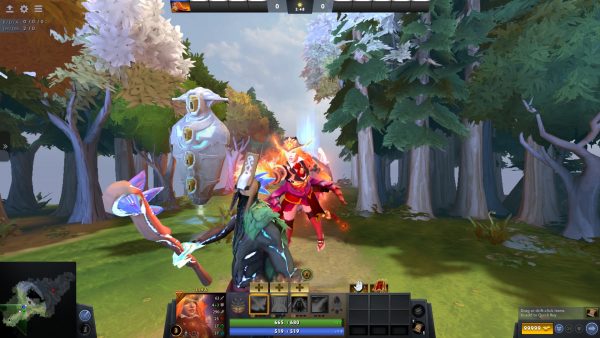 Lina is an incredibly potent hero in any role she plays. However, she excels in a semi-carry/carry/support role. In her Semi-Carry role, she’s more of a ganker, flitting in and out of lanes to pick off enemies that are low HP. Carry Lina operates similarly, but usually stays in lanes more to farm gold and EXP for the fights to come. However, she’s not that popular as a carry, as she’s incredibly squishy and is prone to be ganked herself.

Meanwhile, Support Lina is more focused on ensuring that the enemy carry is having the worst time possible. She steals enemy camps, harasses them to the point of leaving, and overall just ensuring that the lane is untenable for them. In this case, it’s usually a good idea to focus more on magical damage rather than physical damage. Having high MP helps this playstyle as it allows her to spam as many of her skills as possible. Combine that with Neutral items that reduce cooldowns and you have a game.

Depending on the playstyle, you can either go for Light Strike Array or Dragon Slave. Depending on the situation, you can either annoy the ever-living hell out of your opponent with Light Strike Array. This allows Lina to shut them down for a few seconds, robbing them of precious last hits and EXP. On the other hand, you can go for the aggressive route and get Dragon Slave, last hitting as many enemy creeps as possible and chipping away at the enemy hero. You don’t go Fiery Soul at Level 1, ever. It’s useless until you can use your abilities.

Lastly, always prioritize getting Laguna Blade as fast as possible. This allows Lina to shred enemies in the early game as most heroes don’t have spell immunity at level 6. A Light Strike Array followed by a few auto attacks and a Laguna Blade is usually enough to kill someone. When ganking or team fighting, always ensure that you have Laguna Blade and Light Strike Array available. These two abilities can erase an unlucky support/carry.

Talent-wise, it’s usually a good idea to get the -2.5 Dragon Slave Cooldown and +130 Light Strike Array damage first. Come Level 20 though, and you have a choice to make. If you’re going for a Physical Damage Lina, getting the +30/2% Fiery Soul per Stack Talent is best. You then follow this by getting the additional +150 Attack Range. This makes Lina a machine gun of Physical Damage, especially if paired with items like Daedalus or Desolator.

Due to Lina having the ability to deal physical and magic damage, the suggested items are divided into two sections. You can mix and match items, of course, with no issue. But it’s usually a good idea to pick something and stick with it. Unless it’s Aghanim’s Scepter, that Pure Damage conversion is just too good to not get. 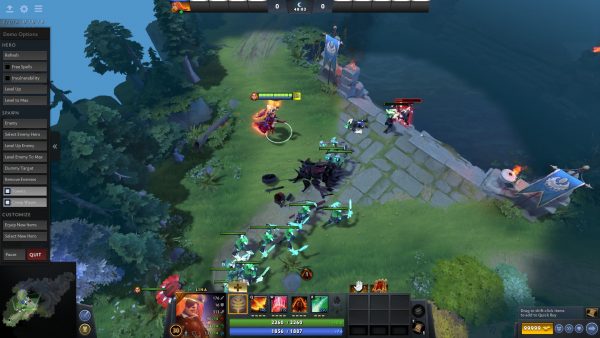 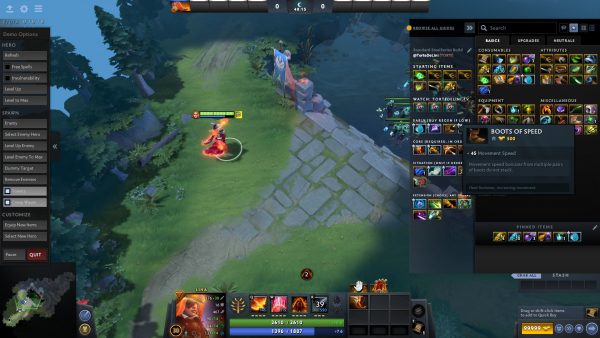 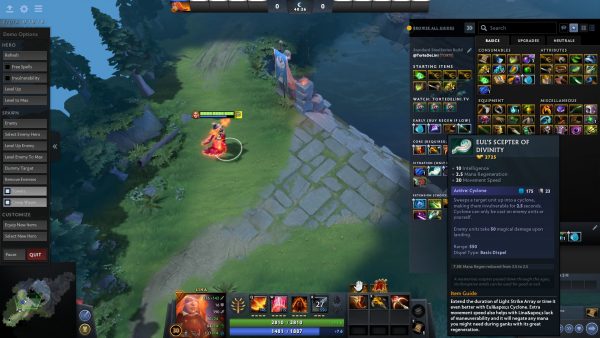 You can buy Aghanim’s Scepter for Physical Damage Lina as well. However, this item has more benefits on Magic Damage Lina due to her propensity for spamming spells. 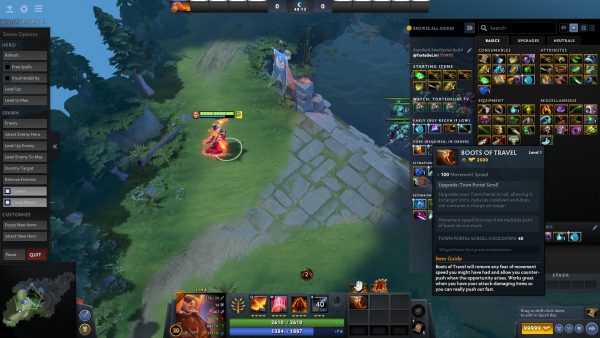 This is the start of the differences between Magic Damage and Physical Damage Lina. This is because Magic Damage Lina is more focused on spell damage, which means more mana consumption. This allows her to have the MP spam her abilities willy nilly in the early game. In addition to this, Arcane Boots can be disassembled to create Aether Lens later on, with the boots being used for Boots of Travel. 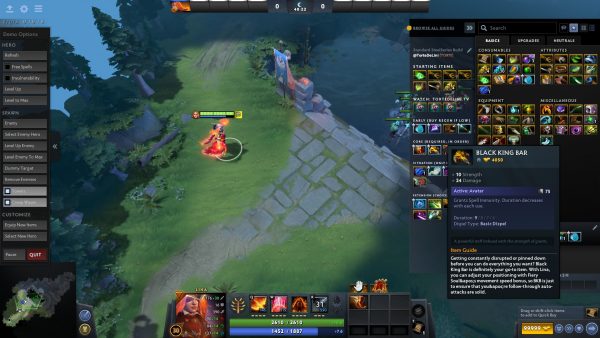 When Do You Pick Lina in Dota 2? 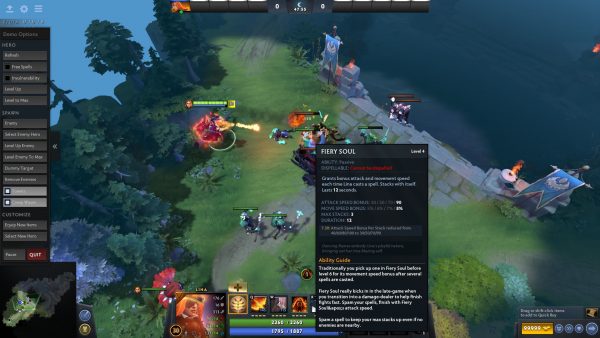 You pick Lina on two different occasions. The first is that you and your team want a great magic nuke that turns enemies into ash, that’s Carry Lina. The other is that you want a good way to initiate fights and gank enemy lanes for kills, that’s Support Lina.

Either way, she can excel on those jobs and be a great addition to any team comp on Dota 2. Just make sure that you can keep up the pace of her spells.

Heroes Countered by Lina in Dota 2

Any heroes with low HP like Ancient Apparition or Crystal Maiden are in immediate danger the moment Lina gets her Laguna Blade. The combo will instantly turn their HP into nothing.

Enchantress is a great hero that can slow down attacks using her Untouchable. However, Fiery Soul allows Lina to mitigate the slow, and she’s easily destroyed by Laguna Blade thanks to her low HP. In addition, she’s also great for clearing Enchantress’ creep that she charmed into her service.

Laguna Blade can slice through Necrophos’ Ghost Shroud and deal with him easily.

Pudge’s Dismember can be stopped by using Light Strike Array. In addition, a Physical Damage Lina can easily chip down Pudge’s HP with the use of Fiery Soul.

Counters Against Lina in Dota 2

Faceless Void can easily mitigate the damage that Lina deals by using Time Walk. In addition, she’s a prime target for his Chronosphere, which can destroy low HP heroes if Faceless Void is fast enough.

Slark’s Dark Pact can be cast before Light Strike Array hits him, which will activate when he’s stunned and dispels it. In addition, Slark has several great methods of closing in on Lina, while also stopping her from using her various spells. Special mention goes to Shadow Dance, as it allows Slark to escape from Lina’s Laguna Blade.

Silencer’s abilities are a natural counter for heroes that rely on spells. This is especially true for Lina as she needs to use her spells to ramp up the damage, even on Physical Damage builds. His Last Word and Global Silence renders her incapable of casting, while Arcane Curse discourages ability usage as it’ll damage her when she does. 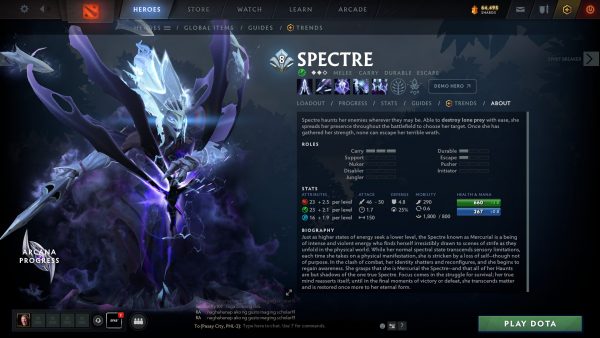 Spectre, like Slark, has great ways of closing in on Lina through the use of Spectral Dagger and Haunt. In addition, Lina is in great danger against Spectre due to her Desolate and Dispersion abilities.

Razor is an especially tanky hero that builds items that increases his armor. This allows him to survive Lina’s attacks. In addition, Static Link is a great counter for Physical Damage Lina as it reduces her normal attack damage to near 0.

Sven has high HP, even in the early game. In addition to this, it’s pretty easy for Sven to kill Lina quickly due to his high damage output. He’s also a hero that builds Black King Bar, which immediately invalidates Lina’s abilities. Well, other than Laguna Blade if she has Aghanim’s Scepter, but she’s probably dead by that point. 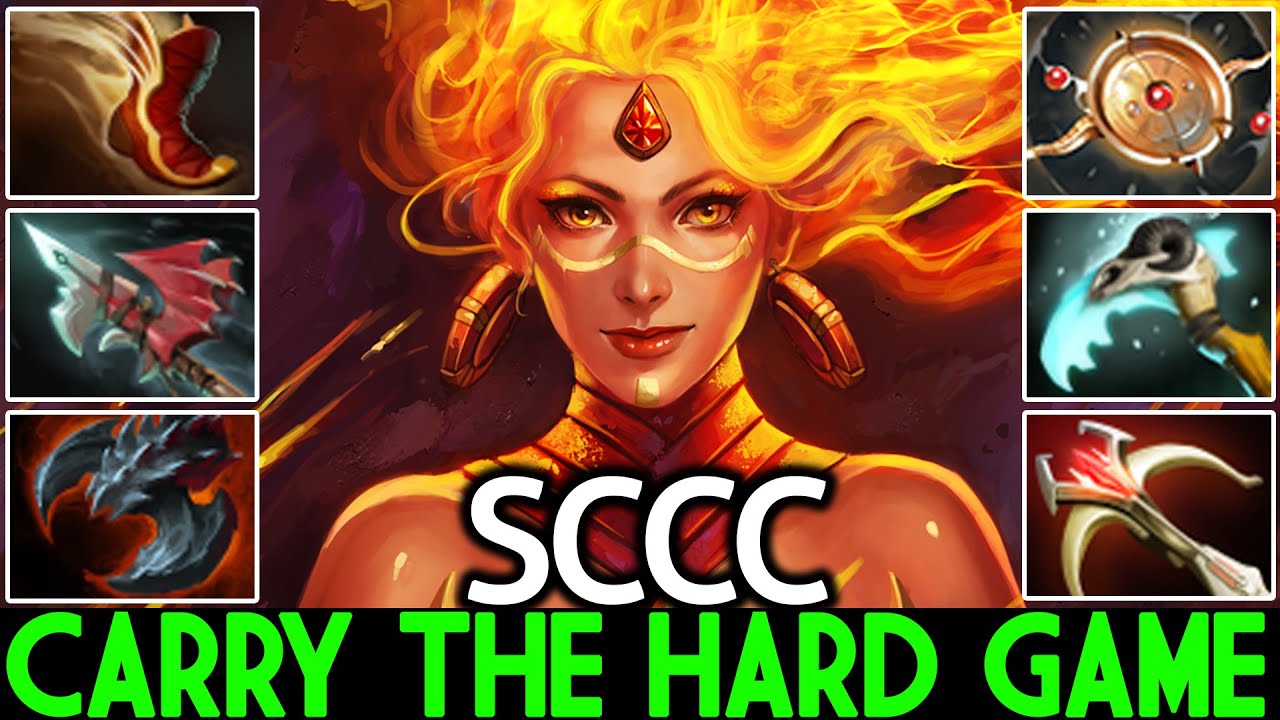 How to Auto Win on Mid

Destroying Sumail Mid with This Trick 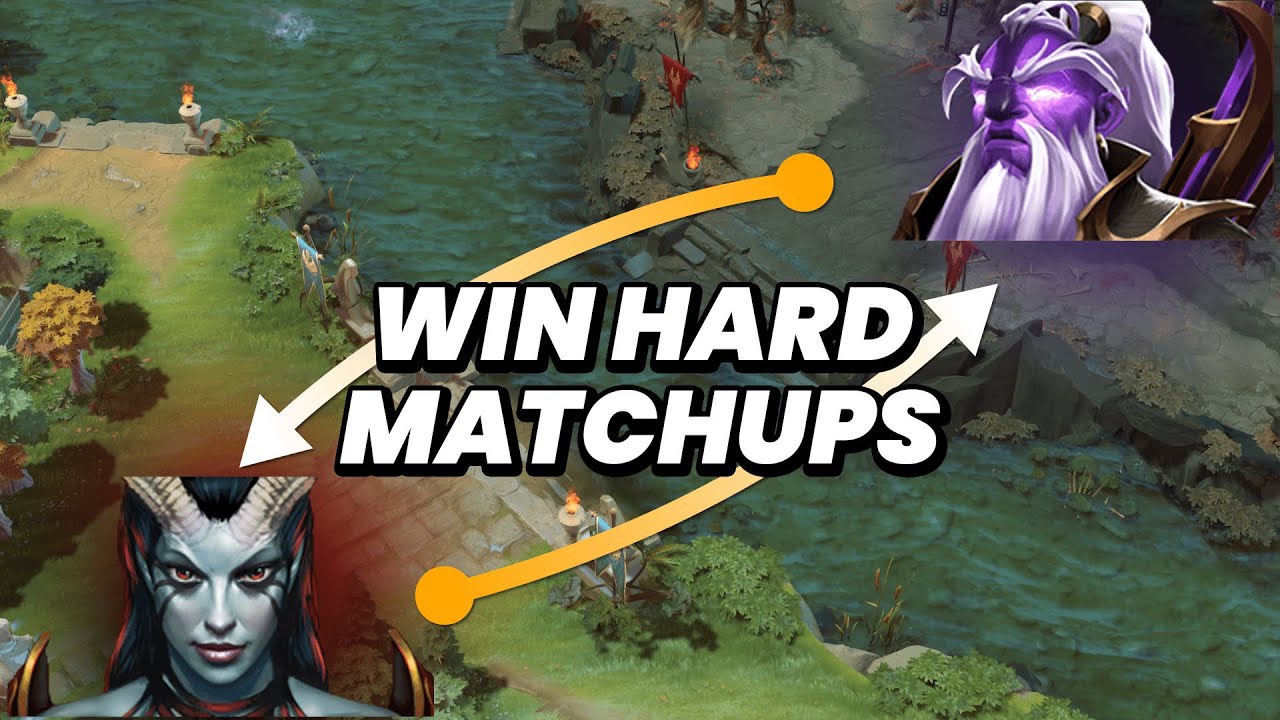 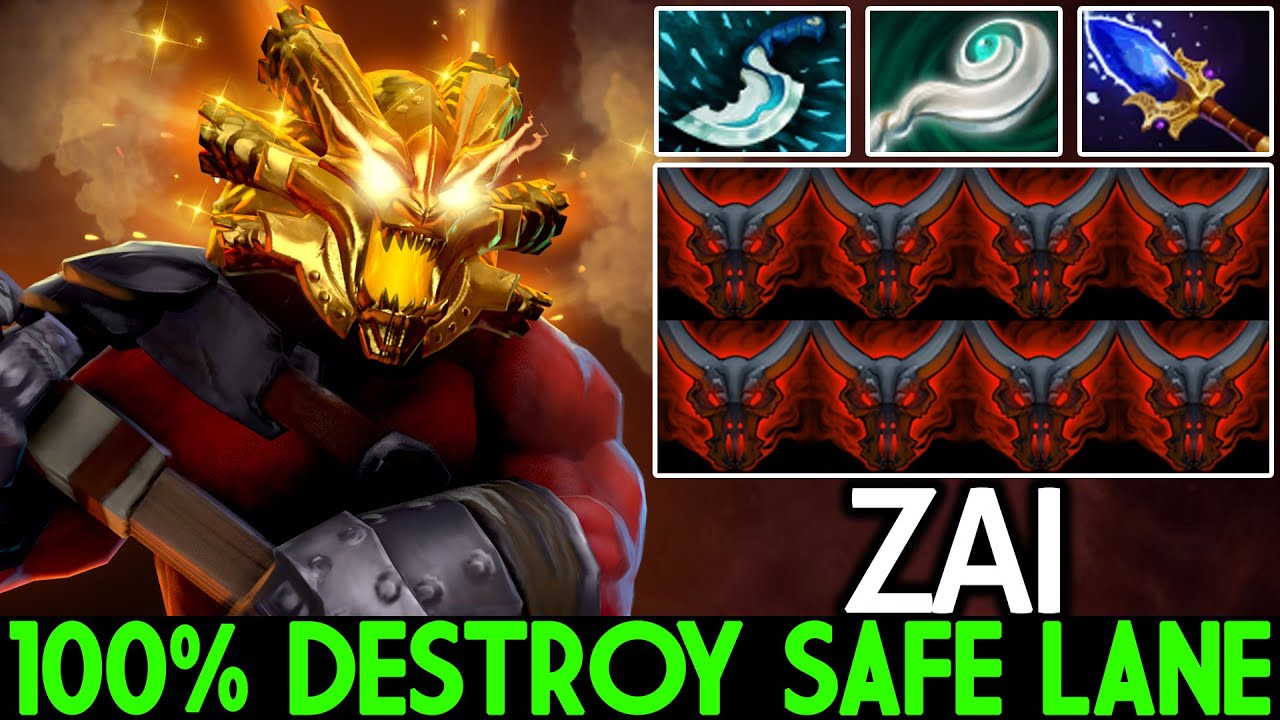